In the Yarnworker space, we tackle big weaves together. During the winter weave-along, we will weave a short ruana-style top that offers so many creative opportunities. A ruana is an outer garment that originated in the Andes.

Note: This weave-along has concluded and the free registration period is open until April 14. If you would still like to access the information you can pay a fee or become a Patron of the Yarnworker School and access this and all other previous weave-along at no cost.

During the weave-along, we will explore a lot of the elements touched upon in Weaving 201: Colorwork, including laying out asymmetrical strips using the Fibonacci sequence, weaving stripes and checks in the same garment, using value contrast and tertiary shading when choosing colors, and embracing our mistakes.

Doubleweave offers additional colorwork opportunities. You can arrange one color on the top layer and a different color on the bottom layer. It is a great structure to use to create a wide garment by connecting one of the layers at the fold. This has an added bonus of creating a continuous plaid back that doesn’t have to be lined up as two separate pieces. The layers are separated on the loom to form the front. The long fringe in the front takes advantage of every inch of loom waste.

I’ll offer a single-heddle version for folks who would rather weave two separate pieces and sew them together. We will discuss the pros and cons of each approach.

This weave-along is appropriate for the adventurous advanced beginner to intermediate weaver. I assume that you understand the basics of direct warping, general weaving terminology, have woven a few projects, and are up for a challenge. We are going to cover a lot of material in this weave-along and weave a fairly big project, but I don’t want this to scare you off. You don’t know what you can do until you try! Weave along, watch along, swatch along—the choice is yours.

We will weave a short ruana-style garment measuring 39″ x 18” across the back and two 18” flaps,  with 10″ fringe in the front and 1″ fringe in the back. I’ll also offer tips for weaving two plain weave panels using a single heddle including seaming options.

The pattern is free for Patrons of the School and offered on a name-your-own-price basis for non-patrons. Pattern sales go to support the school and future weave-alongs.

There is no cost to register for the weave-alongs while they are active and you have free access to the information until we start the next weave-along on April 14. After that time you will either need to pay a small fee or become a Patron and gain continued access to this and all previous weave-alongs.

Single-heddle version only requires a single 8-dent rigid heddle and no pick-up stick.

While it is beyond the scope of the weave-along to offer project modification, yarn substitutions, and variations, there is ample time during registration to ask these questions and I’ve included a lot of tips.

Generically speaking, any smooth, well-plied, light worsted to DK-weight yarn measuring between 800-1,200 yds/lb could work. This is a very dense warp, so you don’t want a yarn that is fuzzy or tender. I used five different colors.

As we know, yarns come and go. The yarn I used here, Louet Gems, is no longer available.

I created a similar palette, using Brown Sheep Prairie Spun DK that I’ll use for demonstration. Here are those specs: 256 yd/100g ball; 100% U.S. wool, DK weight; 1,170 yd/lb, in Seal Brown (PSDK115), Sandstone (PSDK110), Parchment (PSDK150), Red Barn (PSDK50), and Coral Rose (PSDK45). This yarn is widely available from yarn retailers and directly from the mill. Brown Sheep is a treasure in the yarn landscape and I weave with their yarns a lot! They put together a yarn bundle for the doubleweave version.

Patrons, check out this post for a free shipping code for orders placed in the U.S.

Although the color palette isn’t available in this yarn line, you could create a less thermal weight garment from Brown Sheep Cotton Fleece, which we have used in doubleweave many times in previous weave-alongs. I used this yarn in an alternate colorway for the single-heddle version (shown below).

The put-up has slightly less yardage, so pay attention to that when purchasing for the doubleweave version. The single-heddle version can be woven using one skein each of five different colors and an additional weft color of your choice for the stripes or with the doubleweave bundle.

Register for the weave-along to find a link to the pattern that contains all the pertinent information. 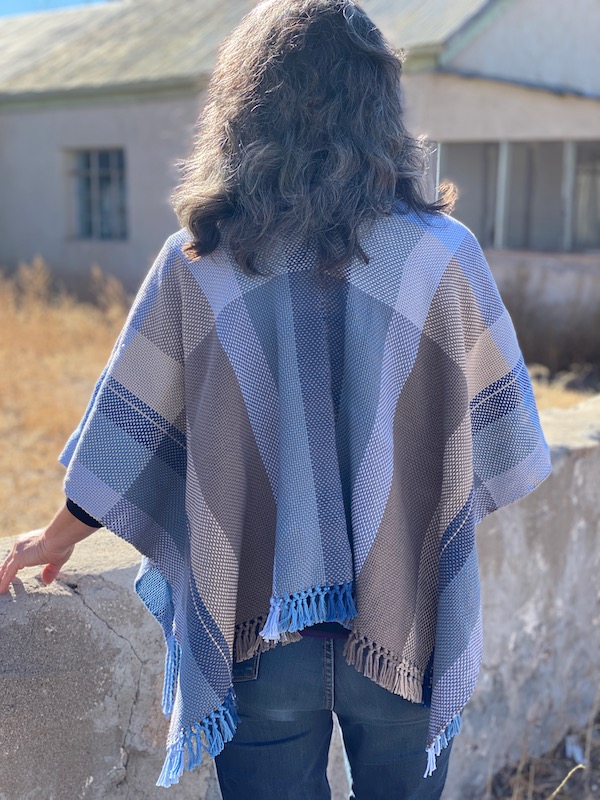 A big shout out to all the Patrons who keep these weave-alongs going. Patron producers get a vote in what we weave next.